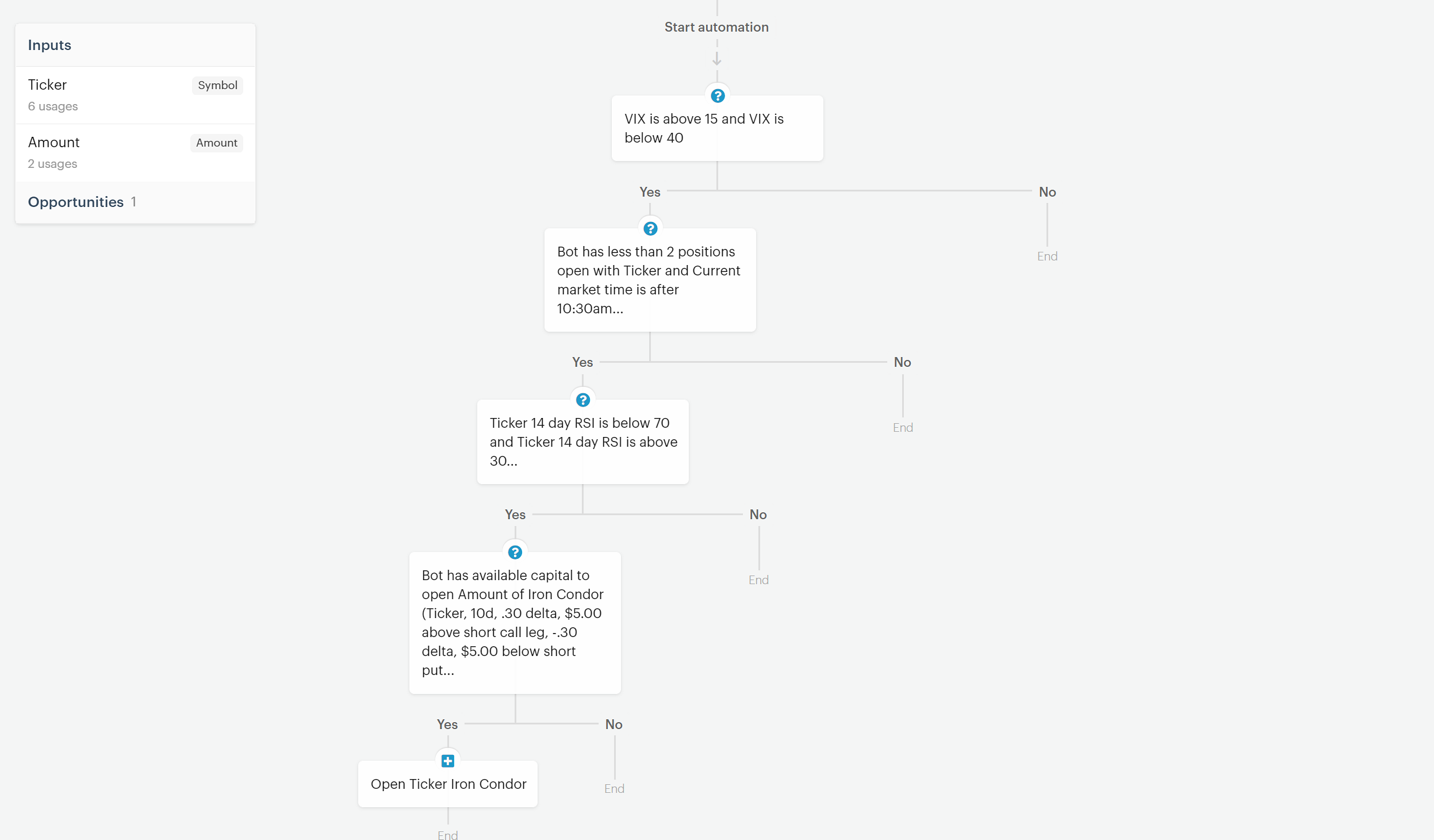 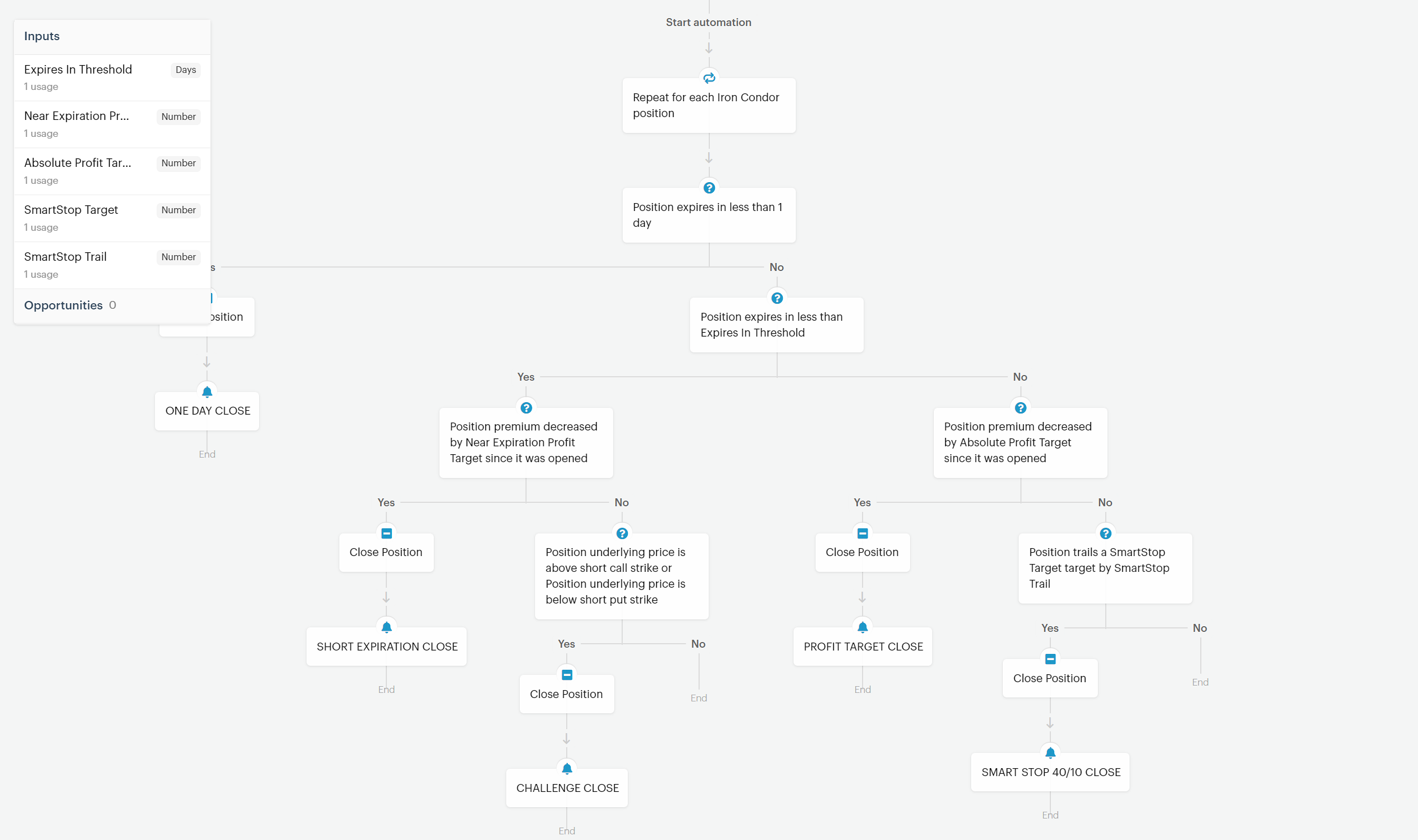 I am having so much pleasure with this bot that I thought it might be a good idea to share this beauty with you. Nothing really fancy but as you can see from the performance chart, which starts at the beginning of July, a steady well balanced rise. I don’t expect this performance to carry through bad weather as there is currently no hedge integrated which is still a work in progress.

10DTE Iron Condor with .30 deltas and $5 wide. The scanner does a bit of a sanity check before entering a trade like checking VIX, RSI and 50/200 SMA. With other scanners I have had some good results in limiting trading hours from 10:30 to 3pm so I added that quite recently to the recipe.

With newer versions of this bot there are also filters for: Bid/Ask spread, Open Interest and Rate of Return. But as I had them too tight the performance suffered and I will update as soon as the fine-tuning looks better.

The bot is trading the classic indices SPY, QQQ, DIA, IWM. In the newer versions I have replaced DIA with EEM because Bid/Ask spreads with DIA were extreme. That is what I would recommend you to do here as well.

The credit for the recently updated monitor goes to Reuben @botstrader . The original one did not have the ‘Challenge Close’ and was running a 30/10 SmartTrailingStop instead of the now active 40/10. It also did not have an ‘Absolute Profit Target’ currently set at 80%. The basis was still doing the same but I expect Reubens monitor to do even better with the additional features.

I see this bot-setup as a nice basis for all kinds of further tweaks and improvements e.g. adding hedging strategies.

Please don’t hold back from giving critical feedback or pitching ideas on how to build out better. E.g. does anyone have an idea which other set of tickers would be worth a try?

Kudos to OA for this outstanding platform and thanks for the extra dopamine kick released every evening ;-)

Also many thank for the templates shared already they were a tremendous help to get up to speed.

by
@dannyvfilms
Attempts to take advantage of IV Crush through Iron Condors in the days leading up to earnings.


by
@dannyvfilms
Opens a portfolio of .15 Delta 45 DTE Iron Condors on 10 of the SPDR Sector Funds.


by
@matt
Bot sells ATM put spreads M/W/F morning when in an uptrend and will also sell call spreads to hedge.


by
@steveganz
Opens long call spread in SPY when Rate of Return is greater than 45%.


by
@steveganz
This bot seeks to buy dips in key stocks after a 6% drop over a 5 day period.


by
@davem68872
SMA based credit spreads that employ trailing stops and end of day close at 50%.


by
@matt
Automated trading BOT template that opens an Iron Condor in SPY twice a week with an 80% chance of profit.


by
@matt
Sets a user-defined budget for buying debit spreads and walks the chain out from 20 Delta.


by
@aubrey
This bot is designed to trade range bound stocks and ETF's with user defined Tickers and Ranges.


by
@bellwar
Bot opens a Long Call Spread and Long Put Spreads in unison depending on the days % change.


by
@optionsurfer
Simple Iron Condor bot that checks for elevated Volatility and Rate of Return.
