Explore the many ways you can leverage different SmartPricing settings to enter and exit positions more intelligently and customize orders.
optionalpha.com/tutorials/leverage-smartpricing-for-intelligent-position-management

You can leverage the power of SmartPricing in opening and closing position actions.

You don’t have to use the same setting every time you submit orders to your broker with bots. You can use different SmartPricing settings in closing orders for optimal position management.

You can customize different closing position actions within the same monitor automation to close positions differently based on specific criteria.

For example, a monitor automation that manages iron condors may have four close position actions to exit a position based on different profit targets, days until expiration, and market conditions.

You can set up each close position action to exit the trade for each unique situation.

Bot automations enable you to be flexible and dynamic with your orders. SmartPricing takes it another step and gives you multiple settings to exit positions based on the position’s status.

Now, what's really cool about using bots is that you don't have to use the same settings every single time when you submit orders to your broker to close positions. In fact, because you can have multiple close position actions based on tons of different criteria that will lead you to close a position, you can also customize exactly how the orders go over to your broker using your SmartPricing settings.

Notice that in some cases, we might be closing the position because it's near our profit expiration target, or it reach an absolute profit target, or it's been triggered by our SmartStops, or one of our strikes is being challenged on our iron condor.

There's a number of different ways that we've told the bot it has authority and approval to go ahead and close the position. But now, what really is cool about using SmartStops settings is we can customize each one of these close position actions to submit orders in a very particular way to our broker.

But if we want to try to close the position because it's being challenged, like we do under this scenario here where the underlying price is either above our short call strike or below our short put strike. We might want to change up the small pricing settings.

In here, we can create a new version of SmartPricing to use only in this particular scenario. Maybe because if the bot gets to this close position action, it means that the position is getting challenged. So we might want to use speedy, SmartPricing settings which tries less prices and spaces out the intervals a little bit quicker.

We still might want to use the 100% of the bid/ask spread as our final price because we want to get the trade filled and closed. So we change up our SmartPricing settings based on the scenario and mark a condition at the time that it gets to this close position action. Once we're good to go, we simply can hit save.

We're willing to let the position try to close itself through multiple iterations and cycles. So we might want to change up the SmartPricing settings to use more of a patient SmartPricing setting. Try more prices, more evenly distributed across a wider time period between the price gaps, and allows SmartPricing only to go through 50% of the bid/ask spread.

Under this scenario, we're being a lot more patient and conservative with our pricing. And we're intelligently adjusting the way that orders are sent to our broker, based on where the bot encounters this close position action inside of our decision tree.

In this scenario, we're being a lot more patient. We're going to try multiple prices 20 seconds apart. Really let the order sit out there and use our final price as 50% of the bid/ask spread. Now, this is obviously much different than in the other scenarios we went through earlier, where we were using speedy or normal SmartPricing settings and allowing the bot to go through 100% of the bid/ask spread.

So by being a little bit strategic with our SmartPricing settings, we can use a lot more intelligent position management inside of our monitor automations. This ensures that under each scenario in which we would want to send orders to close a position to our broker, we're sending over the orders exactly the way that we want.

And notice that we can use dynamically different SmartPricing settings for each close position action. Wherever they fall in your decision tree or under whatever scenario, you're telling the bot that it has approval to go ahead and try to close the position. 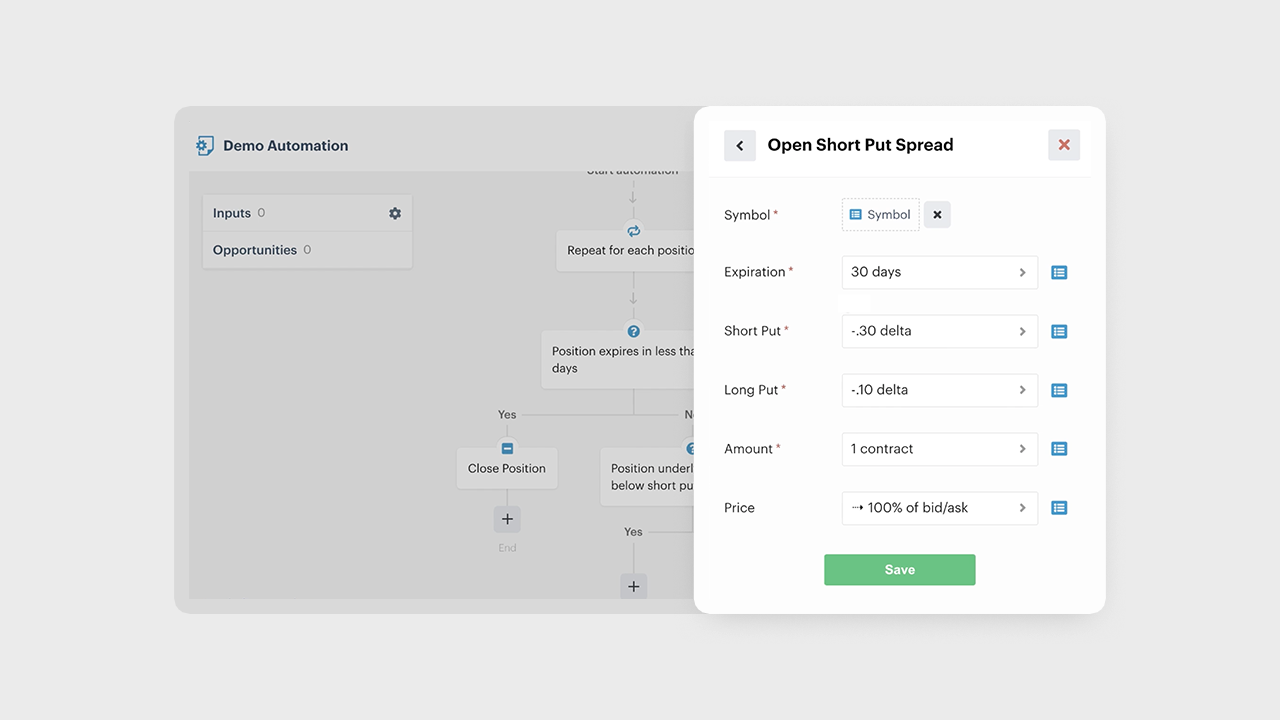 How to Stack Position Actions